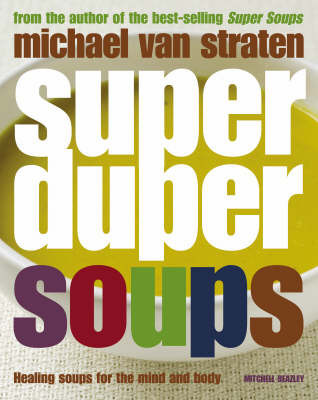 $15.00(NZD)  inc GST
save $20.00(NZD) (57.1%) $35.00(NZD)
Available Stock: 2
Add to Cart Click & Collect Add to Wishlist
Description
Super Duper Soups introduces 60 new soups which offer the health benefits that proved so popular in Super Soups, including immune-boosting, circulation, slimming, and good mood, plus many more. Plus there is a range of detox and healing diets to put you on the road to tip-top health. Like Super Soups, Super Duper Soups lists common conditions such as headaches, colds, insomnia, and menstrual problems in its healing charts, and suggests which soup will help you make a speedy recovery.
Promotion info

Michael van Straten is a highly respected authority on complementary medicine. He has practised as a naturopath, an osteopath and an acupuncturist, with a special interest in the relationship between health and the food we eat, for more than 25 years. Michael appears regularly on TV and has presented his own series on herbs and cooking. He writes for the Daily Express, the Sunday Express and Woman as well as other magazines and newspapers